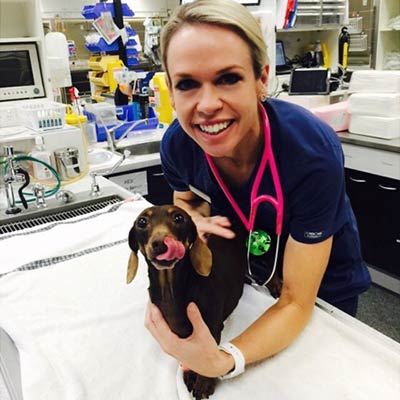 Frankie is a 5 year old Dachshund who presented to Animal Emergency Service after her owner caught her with a chicken drumstick and she swallowed the bone. Frankie’s loving owner was concerned due to the size of the bone and Frankie’s tiny 3kg frame.

Frankie was examined by Dr Alex Hynes at AES Underwood. She wasn’t showing any signs of distress and her behaviour was quiet but alert. Her breathing and vitals were all normal on examination as was examination of her throat and tummy. Dr Hynes had two challenges ahead of her. Her first was to find the bone. The second was to remove it as easily and quickly as possible.

Cooked bones are dangerous to pets for a number of reasons. The most obvious is a risk of obstruction (a blockage) in the digestive tract. This can occur in the throat, stomach, intestines or rectum. The further along the tract the blockage is, the chance of removal via endoscope reduces and surgery is required. Further to that is the risk of internal damage. Cooked bones become brittle and have jagged edges that can perforate the bowel with life threatening consequences.

Dogs love to chew bones. It’s great exercise for their jaw and they benefit from nutrients found in the bone marrow. Dogs can have two types of raw bones. They can have raw edible bones (chicken wings or necks) or huge bones full of marrow. Certainly not chicken drumsticks and definitely not any kind of cooked bone – EVER!

It didn’t take long to find the culprit’s location on the radiographs. Dr Hynes and the team had a small window of opportunity to remove the intact bone from the stomach via endoscope. Frankie was in great hands with a highly trained emergency vet nurse monitoring her general anaesthesia and vital signs while two veterinarians performed the procedure. 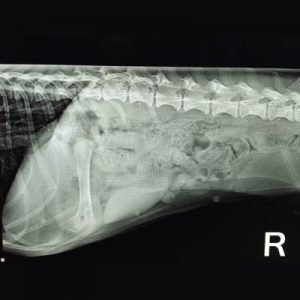 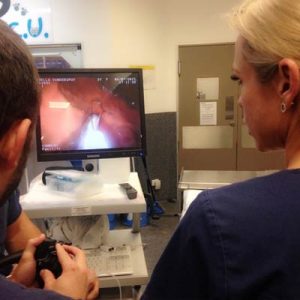 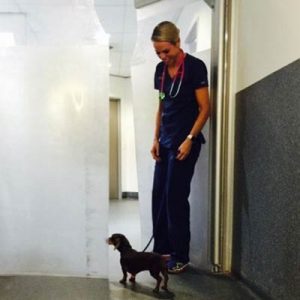 Dr Hynes and Dr Hall commenced with a camera inserted via Frankie’s mouth. They examined Frankie’s throat, oesophagus and stomach along the path to the bone. Then a pair of forceps were used to clasp the bone and retrieve it. This is not as simple as it may seem. Expertly holding the camera in place is one challenge. Getting hold of the bone is another. Retrieving the forceps without losing the bone or allowing it to cause damage on the way up is a true test in patience and skill.

Once the chicken bone was removed the camera was inserted back down into the stomach but thankfully the damage done was minor and could be managed with medication. Frankie was transferred to hospital and allowed to recover comfortably with sedation and pain relief. Dr Hynes called Frankie’s family to give them the good news.

Frankie stayed in hospital overnight and was discharged home on Sunday morning with AES Home Care Instructions outlining Frankie’s diet, medication dose and frequency. A detailed report of Frankie’s Diagnostics and Emergency Procedure were then electronically forwarded to Frankie’s Vet.

Dr Hynes and the team at AES would like to thank Frankie’s family for giving us permission to tell her story. Your generosity gives us the opportunity to highlight the dangers of cooked bones.