Being decedents of desert animals, cats exhibit heat seeking behaviours as they are hard-wired to  thrive in more toasty climates. These behaviours include seeking out that one patch of sun to stretch out in, crawling onto their owners comfy lap or seeking out the heat

vent in the house to wrap themselves around. Sometimes these behaviours can get them into trouble though and as the temperatures around Australia begin to cool down pet owners need to be aware of the more dangerous places their kitties may tend to nap.

Cats generally have a pretty thick coat which is great for insulation in the colder months but can also cause them to lay a bit too close to heat sources, such as radiators and portable heaters, causing superficial burns to their skin or singed whiskers. Make sure to keep a close eye on your cat around these heaters to discourage them from getting too close.

Our recent patient at the Animal Emergency Service, how 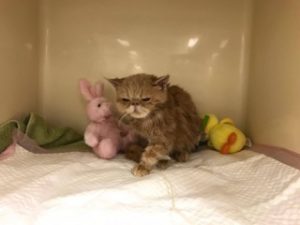 ever, is a good example of one of the more dangerous places that kitties can snuggle down and seek warmth.

’Rumple’ (seriously this is his name, I know, so cute!) tried to change his name to ‘Perm’ the other night when, unbeknownst to his roommates, he climbed into the dryer where it was nice and warm for a nap. He had a rude awakening when he  was joined by some clothes and the dryer was then turned on. Poor Rumple went for a spin for about 25 minutes before they realised their mistake and when he got to the Animal Emergency Service for treatment he was in a bad way.

Rumple was very dull, dehydrated and having breathing difficulties. His temperature was dangerously high and he was in a lot of pain from thermal burns to his mouth, ears and eyes.

On arrival at our clinic, he was immediately cooled, given pain relief and IV fluids to stabilise him and more specific tests were done to determine the extent of his injuries. Rumple was one very lucky kitty. The quick action of his owners to get him into our clinic so we could start to cool him down and stabilise him definitely saved his life. No internal injuries were found and his burns are being managed with pain relief and topical medications. After a night in hospital Rumple was feeling a whole lot better and is recovering well at his regular vet.

Cats that are stuck in dryers for any length of time run the risk of having severe head trauma, heat stroke, pulmonary oedema and severe burns especially to their ears, paw pads, nose and eyes.

Unfortunately what happened to Rumple is not an uncommon presentation to Animal ER’s across the country especially as the temperatures start to drop. The best way to avoid this from happening is to keep the laundry room door/dryer door closed so that they are not tempted
to enter. It is always good practice though to have a quick peek inside the dryer before you place your clothes in just be sure that your feline friend hasn’t quietly snuck in while your back was turned. We all know how sneaky they can be!