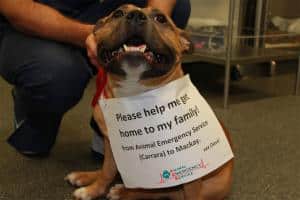 It’s been a busy week for Diesel the Staffy. The celebrity canine has been groomed, interviewed, photographed, been shopping, had a limo ride, and caught a flight – all to return to his family after two years of separation.

On Sunday January 20, 2013 Diesel was found running along a major Gold Coast road. A passer-by feared he’d be hit by a vehicle and took the time to hand him in to Animal Emergency Service (AES)at Carrara. Diesel was briefly examined and scanned for a microchip before being put to bed with some dinner and water. Fortunately for him, one of the phone numbers on his microchip was current and a message was left for the owners to contact AES to collect their uninjured pet.

What a surprise for the Skinner-McDonald family! They were quick to call AES stunned and emotional to hear he had been found. They believe he had been taken from their yard 2 years ago while they were out. They spent months contacting vet clinics and the local pound, as well as door-knocking their neighbourhood without success. After all this time, they were shocked and found it difficult to believe he had finally been found.

When a lost pet is presented to AES they are immediately scanned for a microchip. Once located, the serial number is lodged with Central Animal Records and the owner’s details are retrieved. As long as the information is up to date, owners are usually contacted within the hour.

The initial phone conversation with the Skinner-McDonald family was as much a shock for AES as it was to them. They told us about their heart-breaking story and requested time to organise logistics as they had recently relocated to Mackay. AES offered their assistance, which was graciously accepted, and reached out to their online community for help reuniting the family.

Within 12-hours up to 50 offers of help had been received. Some offered to drive Diesel to Mackay themselves, others offered donations, and many shared the story via social media. An animal-lover named Hayley engaged in heavy negotiations with a contact she had at JetPets and struck a deal. In no time, Diesel was booked to fly from Brisbane Airport to his family on Wednesday. The Skinner-McDonald family were beside themselves when they heard the news.

On Wednesday 23rd, Diesel and his entourage that included an AES Senior Nurse and Veterinarian were picked up by limousine for transport to Brisbane Airport. There, he was met by a representative of JetPets for his flight home. It was a very emotional reunion when Diesel was finally in the arms of his family who had a surprise waiting at home – a big juicy bone!

There are many people AES would like to thank for helping with Diesel’s amazing journey. Central Animal Records, JetPets, Seven News Brisbane, Surfers Paradise Limousines, The Gold Coast Bulletin, The Mackay Mercury and the thousands of pet-loving Facebook supporters.

Finally, but certainly not least, AES would like to thank and congratulate all AES employees who went above and beyond caring for Diesel and ensuring his safe return. Our team of dedicated professionals pride themselves on excellence in client and patient care, and this story is testament to all your hard work.

Read about Diesel’s journey courtesy of the Mackay Mercury: “Dog to be reunited with family after missing for two years”.

Are your pet’s details up to date? Download the COP form for owners.