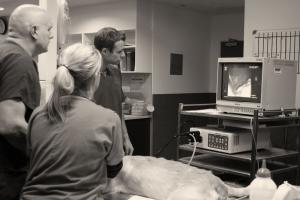 In mid March, a Cavalier King Charles Spaniel called Charlie was presented to Animal Emergency Service (AES) in the late afternoon with a fishing line hanging from his mouth. Charlie’s owners had been fishing earlier in the day and witnessed Charlie swallow a prawn which was attached to their fishing line. Unfortunately for Charlie that prawn was attached via a hook.

These sort of injuries are frequently treated at Animal Emergency Service. The beautiful Queensland climate makes fishing at the beach an enjoyable family outing, but all too often we forget about the possible dangers to our pets and fish hooks are certainly one to watch out for.

There are two main types of fish hooks, the treble hook which is made up of three anchors and the single hook which is as the name implies. As we know, these mechanisms are used with bait to entice fish. Unfortunately the bait is also attractive to dogs and cats. This was Charlie’s dilemma. One minute he was munching on what looked like a tasty treat, and the next he was on his way to the emergency vet clinic!

On presentation to AES Charlie was behaving normally and not in noticeable pain but the fishing line hanging from his mouth was a giveaway. On examination, Dr Sasha Novitski explained to Charlie’s owners a radiograph would be necessary to assess the exact position of the fish hook. They agreed to hospitalization and further examination showed the fish hook was lodged in Charlie’s oesophagus, near the larynx. Charlie was anaesthetized and the fish hook was removed without any complications using a video-endoscope.

A common misconception is that a fish hook will eventually pass naturally but this is often not the case. The further a hook passes down the digestive system, the more likely it will become embedded and cause severe damage. It is also more difficult to retrieve. If a fishing line is hanging from the pet’s mouth it is important not to tug on it as this could cause more damage. Do not cut the line either. The safest course of action is to seek immediate veterinary attention.

Beaches and waterways are not the only locations where fish hook injuries take place. Some adventurous pets manage to do their fishing at home! In March 2011, a Ragdoll cat (also called Charlie) was presented to AES. Charlie’s owners woke one morning to find him caught up in fishing rods stored in the garage. His feet and mouth were snared on the hooks and he was very distressed. Charlie’s owners cut him free from the fishing lines and bought him to AES.

After an examination by Dr Luke Hearnden, a radiograph showed a hook penetrating the skin on the left lateral metacarpal as well as another on the third digit of Charlie’s pad on his right hind leg. Both of these were removed successfully. Charlie was discharged tender and sore. He was given medication and his owners were advised to monitor the wounds for any swelling or discharge. His injuries were quite minor considering how serious fish hook injuries can be.

Fish hook injuries are more common in summer months. The main locations of concern are beaches and waterways where fishing is popular. Quite often, the injuries occur while owners are fishing or walking along the beach. It is important to closely monitor your pets at these locations and store your fishing equipment safely at home.