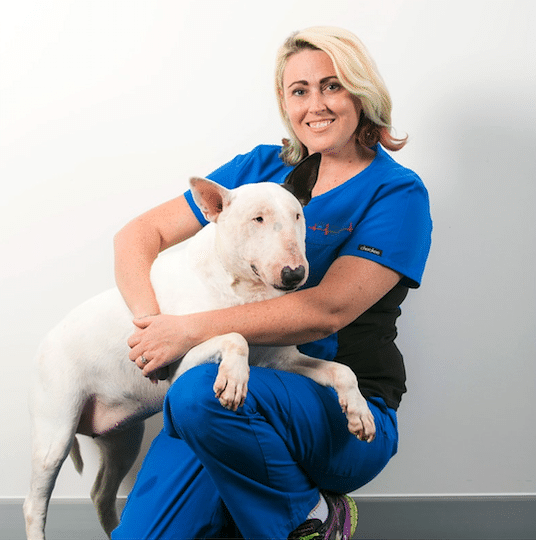 Amanda Campbell is a Senior Nurse at Animal Emergency Service on Queensland’s sunny Gold Coast. Having dogs as she grew up was wonderful, but when it was only when Amanda started volunteering at her local animal shelter that she knew even the smallest act of kindness towards an animal can make a difference.

Wanting to make her own mark in the world, it wasn’t until she received a visit from AES’ fearless leader Dr Rob Webster, who delivered a Christmas hamper to the clinic she worked at, that she truly found her place. They chatted about a case that had presented to Dr Rob and his team earlier that week, and that is when Amanda found her true calling. “I just thought wow, that’s amazing, and I asked him on the spot if he was looking for nurses on weekends. I then started working my normal clinic job and weekends at Animal Emergency Service in the Carrara hospital. I was hooked and 2 months later I was full time there – I’ve never looked back, that was 10 years ago!”.

This very difference lead to one of Amanda’s most memorable cases. “A chocolate Labrador had spinal surgery with the specialists and was given 10% chance of walking again. He stayed with us for nearly three months. Everyone worked so hard with his physio and well-being – he even celebrated his birthday with us and his owners got him a doggy cake and bought one in for our team to share as well. Both the lab and his dedicated parents never gave up, and our team really pulled together to provide the best care we could.  To see him walk out of the clinic, albeit with a wobble, was the greatest achievement – he was wagging his tail while everyone was in tears! I was overwhelmed with joy, it was an incredible feeling.”

Amanda has no shortage of these cases however, and she recalls a 3 month old Samoyed pup that had to undergo surgery – for eating a sock! Only three weeks later she returned for more surgery, as she had eaten a pair of underpants! Exactly one month to the day later she had eaten another sock so more surgery. And low and behold, the naughty pooch returned to us again at 7 months old – as she had eaten yet another pair of undies! This time the owners were on the ball and the team were able to induce vomiting before it got to the point of surgery yet again. She is a ball of energy and took it all in her happy little stride.

When Amanda isn’t working, she likes to swim – she finds laps relaxing and therapeutic. Amanda also loves the theatre and attending concerts with her friends – although, sometimes she prefers to hang out with her husband and dog on the couch. Amanda has a bull terrier at home, and she loves to walk along the peaceful and relaxing Broadwater at the Gold Coast.

What would you say to an aspiring vet nurse?

There will be wins and losses, but the good will always outweigh the bad. hang in there – it’s the most rewarding feeling to reunite pets with their families.

Tell us what it's like working for Animal Emergency Service.

We have the most dedicated teams of vets and nurses, the knowledge and experience is phenomenal, we are always learning and treat our patients like they were our family.

What's the funniest thing that has ever happened to you on the job?

Probably gluing my fingers together with tissue glue while attempting to place a nasal line in a patient, took about 10 minutes to get them apart!